These healthy cinnamon rolls are made with whole grain spelt flour. Low in sugar, yeast-free, and less sugar than the classic version!

Excited to share my latest, awesome, low sugar creation with you, that is. Healthy cinnamon rolls!!!!

I've made this recipe countless times over the years, always trying to make sure it's perfect. My husband and kids are gaga over these, and I too am thrilled with them.

Most cinnamon roll recipes are full of sugar and/or yeast, neither of which I handle well.

As usual, my indomitable craving turned into a full-blown, tunnel-visioned objective, which ultimately led to today's deliciousness.

How To Make Healthy Cinnamon Rolls

First, you make the dough. Stir together the dry ingredients, then add in the applesauce until mixture looks 'pebbly'. Finally, add in the remaining wet ingredients to make a dough.

Knead and roll out the dough.

Spread the dough with butter and sprinkle on the cinnamon sugar. Then, roll the dough up, jellyroll-style.

Can you make these gluten-free?

I haven't personally tried, but the best gluten-free substitution is going to be the 1-to-1 Bob's Red Mill Baking Flour.

Is there a substitute for the applesauce?

I've tried plain yogurt with good results, though they can dry out easily if you don't watch them carefully. If you choose to do this, omit the vinegar. Also, you won't need to bake them as long (about 8-10 minutes instead of 12-13).

The bake time is particular, so watch it carefully.

At 12 minutes, the bread is puffed, and the insides are doughy to the point of almost being undercooked, which is not necessarily a bad thing. As they sit for a minute or two, this improves.

There is NO added sweetener in the dough portion of this recipe and only a modest amount of coconut sugar in the filling.

This is a smaller batch recipe, suitable for about 3-4 people. Like I've mentioned before, small batch and single serve treats work better for us!

For my husband, I make a glaze with organic powdered sugar and milk, but the kids and I generally eat these naked.

Go the old-fashioned route with a mixture of powdered sugar and milk. See this recipe for better details.

Grind some coconut sugar to a fine powder in a coffee grinder and mix with milk for a healthier version of the above.

Spread some coconut butter on top.

Skip the frosting and dunk your roll in your favorite tea or some Homemade Walnut Milk. 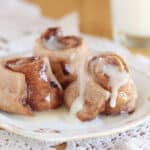 FOR THE CINNAMON SUGAR FILLING: