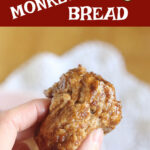 This Homemade Monkey Bread is a delicious and healthy recipe that is perfect for making with kids. NO bundt pan needed, and it's lower in sugar!

What is monkey bread?

I only learned about monkey bread a few years ago, but thought, 'what a delicious concept!'.

It's basically little balls of dough wrapped with melted butter and cinnamon sugar.

That's exactly the kind of thing I'd request as a last meal, ha!

This yummy treat gets its name from how it is eaten, which is by picking off chunks of dough. This method is similar to how monkeys groom each other. Quite gross when you think of it that way, so let's move on!

Why you'll love my (healthier) recipe

As you can guess, I've taken the traditional monkey bread recipe and made it healthier! Here are some of the ways in which I've done that:

How to make healthy monkey bread

Mix together the dry ingredients first, then add in the cubes of cold butter. It's best to work the butter in with your hands, in the style of making biscuits. It should look 'pebbly' in texture.

After stirring in the milk, you will have a dough. You may need a tablespoon more or less of the milk, depending on how you measure your flour.

The dough should be plenty moist, but not sticky to the touch.

Once you have your ball of dough, you'll want to pull off pieces of dough (a bit smaller than a golf ball), dip them in melted butter, roll them in cinnamon sugar, and place them into a small baking dish like this one. NO bundt pan needed!

You'll then bake the bread until golden and puffy!

The best times for kids to help is when the (unbaked) dough balls are being made and when they are being dipped in butter and rolled in cinnamon sugar.

If you like, you can also bake individual monkey bread portions in muffin cups! Just oil the pan really well beforehand and add just enough to barely fill the cup. Bake time will be less, at about 12-15 minutes.

We like to underbake ours a (somewhere in the neighborhood of 15-20 minutes). It yields soft, doughy balls that are slightly firm and gooey. 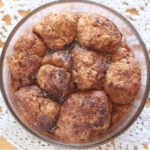