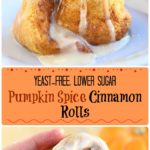 These healthy pumpkin cinnamon rolls are both figure-friendly and easy to make! They're fun for kids to make, and they're lower in sugar and yeast-free.

How 'bout some pumpkin spice to kick off the season?

Hubsy has officially declared these 'his favorite treat ever'! I think he may have forgotten about this mint chocolate pie, but I won't fault him.

These are pretty good, if I do say so myself, and they're a great way to break out the pumpkin, if you haven't already.

How to make pumpkin cinnamon rolls

The reference point you have for cinnamon rolls might be a tad different from what I've created here.

The actual bread part of my roll is totally sugarless. The sweetness comes from the cinnamon/pumpkin spice/sugar combo that gets sprinkled on the inside, as well as the optional icing.

With desserts that are layered, like this one, I find that I only need one component to be sweetened in order to satisfy me. It's a little trick I use to keep my sweet tooth in check!

I enjoy these with a coconut butter/milk 'icing', which I make by stirring together a 1 to 2 ratio of the two ingredients. Sometimes, I'll add in a pinch of vanilla powder and/or 1/2 teaspoon of maple syrup.

I personally think my Peanut Butter Frosting would be a great complement, but I put that stuff on everything, lol.

If you're looking for a non-pumpkin roll, try these Healthy Cinnamon Rolls! They're also yeast-free. 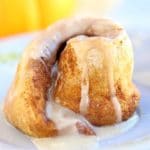 Nutrition facts based on using six tablespoons of unsweetened almond milk and butter in the filling. WW Points: 2

Shared with: What's For Dinner Sunday