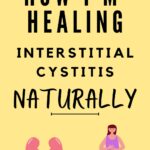 In this post, I'm writing about the ways I personally manage interstitial cystitis, including diet and supplements.

Since January is my 'Detox-mas' month, I thought it would be fun to squeeze in a couple of health topics!

I've been suffering with interstitial cystitis for about two years now. Along the way, I've learned a few things that I thought might help others.

For reference, I've never had bladder issues prior to this time. I've also never had a UTI (urinary tract infection), so these symptoms were all new to me.

What is interstitial cystitis (IC)?

In short, interstitial cystitis is a chronic painful condition that affects the bladder in the absence of a UTI.

My personal experience with it includes frequent, stinging urination, almost as if the urethra is swollen and irritated. I also have pressure and muscle pain in the lower abdomen and pelvic area and just a general feeling of discomfort.

My symptoms can get worse near my period, which indicates there may be some hormonal aspect to it, but what I notice affects it the most is eating foods high in oxalates.

There are many purported causes of interstitial cystitis, including candida/fungal issues, gallbladder dysfunction, hormonal imbalance, and oxalates, though I personally don't believe oxalates are a 'root' cause.

Generally, there is no specific cause documented.

My symptoms came on after my fourth pregnancy with my daughter Miki, with whom I had a postpartum hemorrhage. I also had a wisdom tooth removed about one week prior to the onset of my symptoms. I believe both events impacted my overall immunity.

Natural remedies and supplements that help me

While I have yet to 'cure' this ailment, I've put together a list of things that I find helpful! I will also be sure to update this list as time goes on.

This was the first helpful bit of information I came across when researching my symptoms.

I knew food was playing a role, as I would flare after eating certain things.

I started googling my symptoms, which eventually brought me to oxalates.

Oxalates are natural compounds found in many plant foods, including spinach, rhubarb, almonds, and sweet potatoes. Some foods are much higher than others, like the aforementioned, and some foods have nearly none, like meat and dairy.

In addition to being in food, oxalates can be formed in the body as byproducts of certain metabolic and fungal processes.

Clinical studies and anecdotal evidence show that oxidative stress, mitochondrial disruption and damage, and nutrient depletion – all of which can be caused by high oxalate levels – trigger widely varied symptoms, including fatigue, inflammatory cascades, joint pain, or pain elsewhere in the body. (source)

Oxalates can become problematic for someone by things too numerous to list here, but some of what I believe applied to me includes:

-B6 deficiency, as shown by an Organic Acids Test,

-Malabsorption of fats, as shown by Genova stool test,

-Lack of beneficial flora, as shown by Genova stool test,

-Systemic fungal infection, as shown by Vibrant Wellness fungal antibodies test, which showed various strains of candida in my blood.

The best (free!) test you can try is to avoid higher oxalate foods for a period and assess if your symptoms get better.

To actually measure the oxalic acid your body is excreting in the urine, you can have a doctor order the Great Plains organic acids test.

This is a recent find of mine, recommended by a naturopath to help coat the gastrointestinal tract and bladder.

Truth be told, I am not a huge fan of isolated supplements, as I feel they can throw other things off. As they say, though, desperate times...!

I've been very pleasantly surprised by this one!

I take it before eating something I know is higher in oxalates, and I'm finding that it really helps! I've even read some cases where people have thought it a cure for oxalate issues, though my experience hasn't confirmed that.

There's nothing that dramatic for me, but I notice I'm able to tolerate some higher oxalate foods better than if I didn't take it.

I will disclaim this by telling you that supplements (for me) often work for a while, and then they don't.

Perhaps there's a saturation effect or perhaps it isn't getting to the bottom of whatever created the issue to begin with.

For now, this supplement is helping me.

When you take a calcium with a meal (and it can be any form - does not have to be citrate, that's just my preferred form), the calcium and citrate will "detach" in the gut, and the calcium ion is available then to be chelated by a free oxalate ion.

What that means is that the calcium and oxalate will come together in the gut, not the blood stream. This means that you are more likely to excrete the oxalate in the stool rather than absorb it into the body, where it can wreak havoc.

Taking calcium (or magnesium or potassium) can help buffer the effects of a higher oxalate meal, thus reducing pain or other associated symptoms.

I have found this to be very effective, though too much calcium does tend to cause constipation, which is not good either. If that's the case for you, try magnesium citrate instead.

This wouldn't generally be considered an alleviatory measure for interstitial cystitis, but because I believe my personal issue stems from mold exposure, it is for me!

For a couple of years now, I've been taking a little bit of charcoal every other night, about three hours after my last meal. (It should be taken on an empty stomach if you are trying to bind toxins.)

I have tested high in multiple mycotoxins, and charcoal helps to bind them.

I can't take much, as it also causes constipation, so it has been a slow process.

I did them in my early twenties for elevated liver enzymes and really felt that they helped.

Now, I put them on my lower abdomen and bladder area when I have a flare-up.

My personal experience with them is that they not only reduce pain, but they also help me with sleep and elimination.

This is a great article on how to do castor oil packs, as well as other interesting information.

Like I said above, the best way to test out the oxalate theory is to try it!

I would suggest doing some research on it before beginning, as lowering your oxalate intake too fast can cause issues as well.

For me, I have found that I react to about 80% of foods that are "high in oxalate". I put that in quotations because I find the process to test the oxalate content of foods a bit flawed.

For example, different brands of oats test differently, as do foods that are cooked versus those that are raw. There's still a lot to be explored, and as I wrote above, I don't think oxalates are a "root cause".

That being said, I wanted to link you to a few recipes I have on the blog that are lower oxalate.

If you want to learn more about oxalates, check out these resources

Facebook support group devoted to the study of oxalates